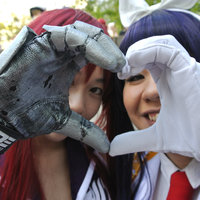 I have been attending conventions as far back as 2006, and cosplaying since 2009. Though I didn't start fully making my own costumes until maybe 2012. Prior to that everything was either bought, or modified. I still have a lot of things I still want to learn and improve on! But I think my skills are slowly getting better.

I'm a huge anime/manga fan, though I also love playing video games. Most of my cosplays reflect that. My current favorite series are: Fairy Tail, Mahou Shoujo Madoka Magica, and Cardcaptor Sakura.