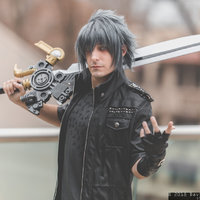 Hey everyone! My name's Sammy, otherwise known as SammySimplicity. I guess you could say I started cosplaying when I was about 14 and made my own Harry Potter costume for Halloween. I remember thinking that the store-bought costumes just seemed so unimpressive, and that I could do it better. From then on, I made my own Halloween costumes every year. Then, in 2010, everything changed for me. I made my Red costume from Pokemon as part of what I planned to be a group costume for Halloween, with other friends of mine dressing up as other characters from Super Smash Brothers Brawl, in which Red appeared. What ended up happening, was I went to my first anime convention in San Jose, California, and I officially debuted Red. From that moment on, I was hooked. I knew that the following year, I wanted to be better, and thus, Christmastown Sora was born. Cosplay has become more than a hobby to me, it's a passion. Every step of the cosplay progress never ceases to fascinate me, from the big picture details such as fabrics, to the minute details like buttons and props. I also love it for the joy I get to bring fans of the characters I portray, because for me, it isn't just about wearing a costume. Anyone can do that. It's about becoming that character, even just for a little while, and making that character come to life for fans of that character. I hope you enjoy exploring around this page, and feel free to come say hi to me at any con we may both be attending! I love making new friends.