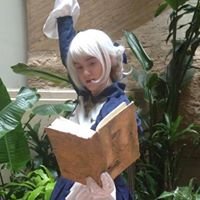 Hello! I'm a 25-year-old cosplayer from Rhode Island. I've been cosplaying since 2009- my first convention was Connecticon. Since 2010, CTcon and Anime Boston have been my yearly cons. In 2013 I started attending Another Anime Con yearly as well. I like to make my own costumes, though I'm still quite a novice when it comes to sewing and making props.

I am also a huge gamer- I've been playing video games since I was old enough to work a Super Nintendo controller!