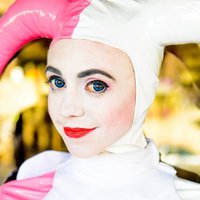 Super silly cosplayer originally from Western North Carolina and now based in Washington, D.C., and am affiliated with geeklurv!


I grew up with a performing background, including dancing and acting, and I try to bring all the elements of characterization I learned from those two mediums into my cosplay! It's not just about MAKING the character, it's about BEING the character. My first ever real attempt at cosplay was in 2012, and I'm trying to learn more and more all the time!!