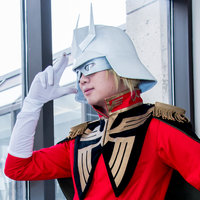 Hello! I'm Tommeh
I've been cosplaying at conventions since 2010, so for 4 years now.
I've been doing my own sewing from mid-2012 onwards (Before, I would have other people like my mother do it for me) and I've been making props for as long as I know!

I usually attend Anime North, Otakuthon, Montreal Comic-Con and G-Anime but I've also been to Katsucon (2013) and Anime Boston (2012).