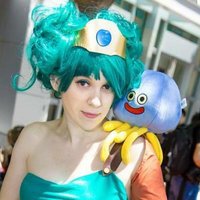 Hello~ I've been cosplaying since 1999, and just seem to keep doing this crazy hobby as the years go by. I'm based in the San Francisco Bay Area, mostly attending cons within California such as FanimeCon and Anime Expo. That said, in the past I've attended cons in Japan, Canada, and a few other states such as Texas and New York.

While I do cosplay from anime series a lot, my true love is video games. In the past I was known to cosplay a lot from The King of Fighters, then THE IDOLM@STER, and over the last few years I've been trying to do more Dragon Quest cosplay. It's not the most popular thing to cosplay from, but it's my favorite. <3