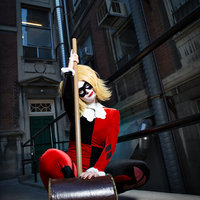 In Canada in a small town, in a tiny hospital, Manda Cowled was born. Her parents didn’t know what an adorkable nerd she would grow up to be but they started her out right. Growing up with Batman: The Animated Series and Mighty Morphin Power Rangers, Manda was starting on the right foot.

Through the years she got more and more into comics and different animes. Doing her Grade 8 end of the year project on Anime and how it entered the western world and would become a hit, siting examples like Dragon Ball, Sailor Moon and Inuyasha she learned as much as she could about Japanese animation with her limited resources.

Moving into highschool she met many other friends that shared he love of the many geekdoms from Anime, Comics to RPGs. Infact many of her new friends ‘cosplayed’ which she had never heard of before, it was like Halloween but you get together at a specific venue and could learn more about and buy merchandise for the fandoms you loved. Liking this idea but not having any skills she purchased her first costume from eBay. It was a terrible version of Harley Quinn from the Animated Series.

After dropping cosplay and some of her geeky hobbies while she pushed through College she found herself in Toronto staying with her best friend and fellow cosplayer Ashe Rogue. Together and with Ray Retro they decided to cosplay together as a group and created The Geekettes. After doing so Manda and Ashe worked hard on getting her initial costumes together and went to Fan Expo together for the first time. Since then Manda has done solo and group cosplays with Ashe Rogue and other Geekettes.

Now she is learning new skills and expanding her cosplay arsenal. If you would like Manda Cowled or The Geekettes at an event near you please request us through the event and have them email us at 1UpTheGeekettes@gmail.com.