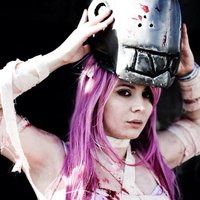 Lady Noctis is an illustrator, alternative model and cosplayer based in the heart of Manchester; who has been published throughout the UK in magazines such as Bizarre, NEO and Scifi Now Magazine. She's is widely known for her latex cosplays, and for her ongoing series "Star Wars: The Latex Saga".

She's previously contributed as a writer for Geek Pride, where she'd write comic reviews and other content; and in addition to this she's an admin for Super Cosplay Girls.

Lady Noctis is a penchant for comic books sci-fi, gaming, and has a "small" obsession with a character known as Harley Quinn (though most people who know her know that already).

"I’m just another dreamer running around in a cape playing superheroes… ok, truth. I’m an aspiring illustrator and model (professional derper) who also likes to play dress up; or as I like to say "I am latex clad superhero".