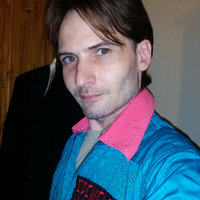 Cosplayer, cosplay photographer, and general geek from the UK :D

Generally known to be wandering around cons as The Goblin King from Labyrinth, The White Power Ranger, or soon to be Egon Spengler... generally found carrying a large camera as well...

"Jareth Spengler has that dry British wit. It takes a powerful mind to go up against such a thing. You need pop culture references, sarcasm, and puns galore if you hope to stand up to him for even a few minutes.

It is not often that the Spengler will engage in a battle of wits, but when it does, the average predator must beware. His wit is savage and dispensed without mercy, and many an overconfident cosplayer with a fancy camera has gone to their shame-filled doom attempting to overtake him.

The Spengler is a wiry beast, capable of attacking without warning, and will often lay docile waiting for an unexpected predator to attempt to take him, lashing out with ironic sarcasm so piercing that the predator is often sent into a fit of hysterical weeping.*