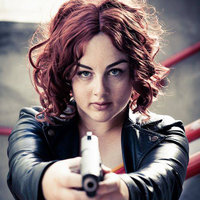 I started cosplaying in 2008 but didn't get completely in to it until 2012. I'm originally
from the Netherlands (which doesn't have many conventions) which hold me back for a while. But when I moved to London that all changed. I started loving it more and more and completely got sucked in to it.

I don't have a certain group or set image for something I want to cosplay but am mainly in to comics, films and tv shows. For 2014 I've got around six costumes planned of which three are already on it's way. I'm training to make whatever I can and progress while doing it. I've not been sewing, crafting and developing for a long time but am loving the feeling of wearing something which I've created myself. It's a challenge and I'm

I do a bit of photography here and there and like to blog about lifestyle, fan culture and a bit of fashion. I earn my money as a digital designer and am a sports lover/gymbunny.

If you want to keep up to date about the projects I'm working on, check out my Facebook page: http://facebook.com/beyondbelievingcosplay.