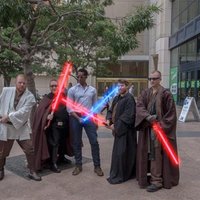 And the Lord looked down upon His Creation somewhere around the eighth day and saw that mankind had already screwed up a good thing.

And the Lord said, “Let us find some way for us to help mankind see the error of his ways.” And He pondered it and said, “I’ll have to sleep on it.”

And the sun set and the sun rose – and it was a day later.

And the Lord said, “We shall create righteous individuals. Men & women who will have the innate ability to differentiate between what is in ‘Good Taste’ and what is not.

“We shall take our time with this task, and they shall be born into the world around the same time. They shall meet, discover their amazing ability and combine their powers to point mankind in the ways of Taste that they should go.

“And they shall be called the ‘Ministers of Good Taste’.”

And the sun set, and the sun rose a bunch of other times and centuries passed – until in the 20th century they were born into the world. And the Lord looked down upon His creation and said “It is Good. They will teach my people the difference between Good and Bad Taste.” They followed different paths, but eventually were fated to meet. Once they did, they discovered their like abilities and a beautiful friendship was born. They perused the world together and decided to blog about their experiences so that people everywhere could benefit from their wisdom.

*Introducing: the Ministers of Good Taste*