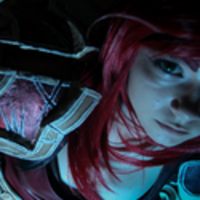 I'm a cosplayer living in London, but I actually originate from Canada and lived there for a while, so my accent can get a little bit silly at times. I also speak fluent Hungarian (and English, duh) due to my heritage, hence why my real name (Csilla) is a bit peculiar (it's pronounced Chilla, if you're wondering).

I play PC games in my free time, WoW, LoL, Wildstar and RS to name a few. I also do digital artwork and I occasionally take commissions. On top of that, I adore a lot of anime and hope to cosplay more of it in the future.

I started cosplaying in 2009, and I have been attending London MCM Expo since May 2011. My first (90%+) self-made cosplay was my Blood Elf, first debuted at MCM May 2014. I tend to make cosplays using multiple references as well as a bit of an influence from myself.