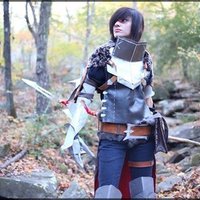 Other names are Cera Kenway. I've been cosplaying for four years! I have cosplayed my version of fem! Link and fem! Nightwing. I'm planning on cosplaying Barbara Gordon soon as well. I'm a Cosplay Deviant and Dick Grayson fangirl ;D who isn't? Lol. I have four cats. I'm a natural brunette. I have seven piercings and six tattoos. I love The Walking Dead; Michonne and Daryl being my favorites. I'm also a huge fan of Assassins Creed. I'm planning on doing a Rebecca set one of these days. I love renaissance and medieval time period related things ^^ bio ware is amazing! I've played through the Mass Effect trilogy which was great and am currently waiting on Inquisition to come out later this year. I also have a crush on Fenris, haha.