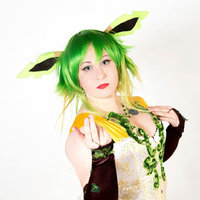 Hi! I'm Cori aka LadyCels (or Cels/Dragonladycels). I'm a costumer/designer/makeup artist from Connecticut. I specialize in Historical Costumes, Moulage Makeup, and Cosplay. I love to make stuff, and I love to teach people to make stuff :3

I started cosplaying in 2003. I quickly started earning awards at small, local conventions for my craftsmanship and designs. I later went on to win a few awards at bigger conventions. In 2008, I decided to call it quits from the contest circuit, rather to concentrate on schooling and improving myself as a costumer. I occasionally work in a judging capacity for conventions, such as AnimeBoston, but I'm most happy teaching others.

Today, I make costumes for not just myself but for others. I may not be the prettiest or sexiest cosplayer out there, but I love the craft and I love the people involved. Cosplay is about fun :D