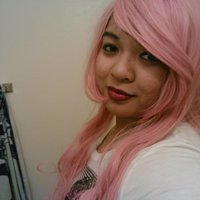 I hail from the land of sins, Las vegas, NV.
I craft things by hand
and Illustrate using sticks and colors. (I dont do digital art yet)

But anywho, I'm a noob at cosplaying and hope to become and avid one, someday soon.

My most recent cosplays have been of Hatsune Miku. i have done a summer bikini version and also a christmas time one.

My currently cosplay i am making is for the LVL UP Expo in Feb 2014 in Las Vegas.
It's a secret!~