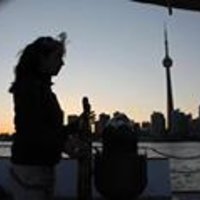 Biography
Rogue graduated from University of Toronto with an HBA specializing in theatre and a minor in English. During this time she also studied stage combat for several years at Rapier Wit fight studio. Currently, Rogue is studying to be an American Sign Language - English interpreter. She is also a certified First Mate on eleven different ships of Toronto’s harbor. In addition to this Rogue loves to act, model, write, and cosplay whenever she gets the chance!

Rogue has been an active volunteer from a young age. During 2005/6 she worked as the Youth Outreach Worker for the AIDs Committee of Durham Region organizing benefit concerts and other events. In 2007 when she moved to Toronto for university she began volunteering with Annex Cat Rescue as a foster parent until the adoption of her three kittens in 2012. During 2012 she began volunteering with Durham Deaf Services and the Deaf Culture Center. After making her cosplay debut at Fan Expo of 2012 she wanted to find a way to harness the attention for a greater cause. Founder of the X-Men of Toronto she ran various events both in conventions and in the city of Toronto in support of organizations such as The Stop, Sketch and TOMA Foundation for Burned Children until her departure in October 2013. She is no longer affiliated with this team. Now, any convention charity events are run in tandem with Don't Panic Cosplay such as the 50/50 table run on behalf of the Yonge Street Mission during FrostCon2013. She also actively participates in Walks/Competitions examples include both the Alzheimer's Walk and Tough Mudder during the 2013 year. Thus far during the 2014 year she organized Cos-Skate For a Cure in tandem with Cosplay For a Cure as well as running an event at Toronto ComiCon on behalf of Sketch. Coming up in May 2014 Northern Panic will be hosting a Cosplay City Clean Up Competition. Check events for more details.

You can find out more on Rogue Benjamin at the following: