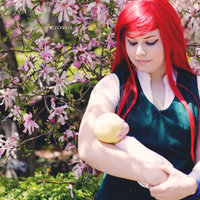 My name is Christina but some of you may know me as the New York cosplayer, Pixie Belle Cosplay and I am the head of of the new New Jersey con, Shinkoucon’s artist alley. I have been cosplaying since 2008 with my first con being New York Anime Fest. There I met a bunch of amazing people and was instantly hooked. It wasn’t till AnimeNext of 2012 that I really started to get into cosplaying seriously and started making all my costumes from scratch. MY first major cosplay was Pixie from X-men and that was when I started to go by Pixie Belle. Since then the name has pretty much stuck. I’m a cartoonist and a crafter so I try to make as much of my cosplays as I possibly can from scratch. I usually tend to do older anime cosplays as well as video games and characters who aren’t too popular from comics but they are all characters I love.