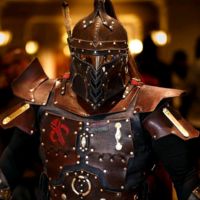 1 Followers 1 Badges 8 Galleries 0 Events
Kayden MacGregor
Never apologize for your art, there is not enough of it out there.

I am a cosplayer and prop maker from Colorado who gathers inspiration from games, movies, books, and TV shows. In 2017 I will am joining the cast of cosplayers featured in the Men Vs. Cosplay calendar. My cosplay has been featured on websites such as Kotaku, Marvel.com, Cospix.net, Fashionably Geek, and even across the pond on the Italian site Gamepare.it. I have been building costumes for myself and my family since 2013 and have since taken first place in several cosplay contests including being part of a Best of Show group at Denver Comic Con 2016. Some of the memorable cosplays I have created include: The Iron Giant (Iron Giant), Yondu Udonta (Guardians of the Galaxy), Zoltan Chivay (Witcher III), Sole Survivor (Fallout 4), and Wilson Fisk (Daredevil). For my family include: Master Chief (Halo), GIR (Invader Zim), and the original costume The Transformer Kid.