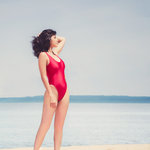 I've been asked a couple times now where I managed to find a wonderful beach around the Kalahari Resort during ColossalCon this year. The real answer is: composite photos! This photo shoot set set up by Elysiam Entertainment featuring Fushicho Cosplay outside of their room at the Kalahari Resort. Elysiam asked if I wanted to grab some shots too, and my only thought was "how could I refuse?" I was there capturing candid and behind-the-scenes photos during this shoot.

In this first BTS shot, you can see Elysiam directing the first part of the shoot along with the full Kalahari Resort in the background. This gives a good idea of the environment we were working with, including cars constantly driving in the street behind everyone!
BEHIND THE SCENES WITH ELYSIAM AND FUSHICHO

Listed below are the two images that were put together to created the final "Baywatch" photo, along with some settings to achieve desired effects. The first is the shot at the Kalahari Resort featuring Fushicho at the Volleyball court.
THE ORIGINAL BAYWATCH COSPLAY PHOTOGRAPH

The image above simply had too many things going on at once. Most noticeable is car in the back ground, the stop signs, some trees, oh and of course the volleyball net. Before tackling any of those in Photoshop, the image begins in Lightroom to help with highlight recovery. The sand on the ground is completely washed out and looks like a flat tan texture.
LIGHT ROOM ADJUSTMENTS

To help with the brightness, I lowered the "Highlights" and "Whites" in the image. To help target just the sand within the image, "Yellow" is also turned down. Because I didn't want the skin and sky colors to become too dark, there is a slight increase in brightness to "Orange" and "Blue". These were the only significant changes made to this image in Lightroom.
THE BAYWATCH IMAGE WITH LIGHTROOM ADJUSTMENTS

A lesson to be learned by all photograhers: You never know when a photo may come in useful. With the Baywatch photo, it was suggested by some friends to replace the background with a water setting. With this concept in mind, I instantly thought of photos from last year's beach photo shoot in Seattle, WA overlooking Puget Sound. After getting home, I quickly searched through that photo catalog to find something that would work out. I settled on the image below because it was shot at a similar angle, with the same lens, with similar settings.
THE VIEW OF PUGET SOUND FROM SEATTLE WASHINGTON

This image was far too bright as it is, and has some cleanup of its own that needs to happen. Most obviously, having another model in the background wouldn't really work out too well! But first, this image needs some Lightroom adjustments. Since I only need it for the water and background, this whole image can be safely darkened without worrying about making the model appear too dark.
LIGHTROOM ADJUSTMENTS

Once again, "Highlights" and "Whites" have been reduced in the image. This time, "Exposure" has also been lowered to help darken the entire image. To help make the image more of a blue tone, "Highlights Split-tone" is set to a blue shade, and the "Saturation" for the split-tone is set to a high value. Lastly in the "Calibration" panel, "Blue Primary Saturation" is set to the maximum value.
THE PUGET SOUND IMAGE WITH LIGHTROOM ADJUSTMENTS

From here begins the fun in Photoshop! A simple selection around our subject is all we need. "Content Aware Fill" will take care of the rest. This feature requires Photoshop CS5, CS6, or CC. After making your selection, press the "Delete" key on your keyboard, select "Content-Aware" from the drop down list, and hit the "OK" button. Photoshop will do all the magic for you, transforming the left image into the right!
CONTENT AWARE FILL THE PUGET SOUND

This same technique is also used on the Volleyball net of the main Baywatch photograph. From here, layering the two images is pretty simple. Place the Puget Sound image on top of the Baywatch image, and mask out around the cosplayer and sand on the ground.
MASK OF THE PUGET SOUND

After this point, some basic adjustment layers are applied to create the desired final coloring effects of the image. Cleanup of the skin, ground, and sky are also done. And then BAM, the final results!
THE FINAL BAYWATCH COMPOSITE COSPLAY PHOTO