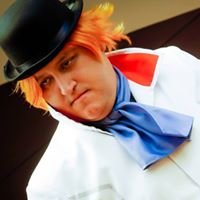 A basic run of the mill cosplayer with no skills of his own to make his own cosplay (for now). It all started back at anime expo 2004, the year in which I transplanted myself from Los Angeles, California to Phoenix, Arizona. I had a fun time the year before at AX 2003 as a graduation gift abet it was short as it was only a day but that was the year my life had changed. The first cosplay I ever did was Orochimaru from Naruto and with every first time cosplayer, it sucked. The next attempt at cosplay was with a better quality cosplay and it was Byakuya from Bleach, again it sucked. The hair was messed up in a botched hair trim, and the number on the back was the right division but it wasn't the kanji form, that was debuted and retired at Anizona 2. After 2 failed cosplay I tried something else, I skipped cosplaying till 2006 and debuted yet another major anime which was Alphonse from the FMA movie and it was good, I was happy with it but it just didn't stick but for a few cons, (little known fact, somewhere on the internet exist a video of me doing the Haruhi dance in this cosplay.) Due to issues with a family death and work after 2006 I did not return to the cosplay scene till 2010 where I was Battler from Umineko for Connichiwa and quickly retired it after an issue with an ex-girlfriend, but for that one convention I had fun because I was roped into a Cosplay Colosseum group with Shiden and one other person who I can't remember. From 2011 to about 2013 I was in my darkest period of my life, I dropped off the face of the Earth when it came to cosplay and the anime community as a whole, and yet it was the same community that saved me from the world of darkness I had entered. I left the job that was ruining my life and went back a few years to something that made me better as a person, and got me back into cosplay, something that made me happy. Now after all that dark stuff my cosplays were Kaoru Kaido (Prince of Tennis), Protag/Crossplay contest(Persona 4), Tuxedo Mask (Sailor Moon), Snow (FFXIII), Cichol (Mabinogi), Lance Aurion (Mi'qote/Snow FFXIII set/FFXIV), and my personal favorite, Roman Torchwick (RWBY). Now that you know all about me, please look forward to my future cosplays like Yuudachi Kai Ni (Kancolle) and if I can handle it, Drachen Armor (FFXIV)