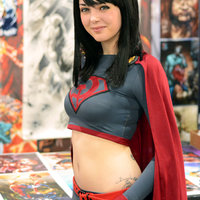 Elizabeth Wither is a Phoenix AZ based Cosplayer. Her love for all things nerdy started as most kids in the 90's did with an obsession with all things Final Fantasy, Dragon Ball Z and Sailor Moon. She quickly progressed from manga and anime to a love of mainstream american comics. Elizabeth has been an avid seamstress since she was 11 years old and began modifying her own clothes to make halloween costumes and gothic lolita inspired outfits. It wasn't until Tucson Comic Con 2012 that she decided to our her love for comics, conventions and sewing into one and take the leap into cosplay.

Since then she has been at over 20 conventions in less than a year as booth support and figure model for comic book artist Shelby Robertson. Her original design of Red Son Super Girl has been featured on Bleeding Cool, Geek News Network, Coslite and many other online and print publications.

She can be reached for photo shoots, interviews and sponsorship at
ElizabethWitherCosplay@gmail.com